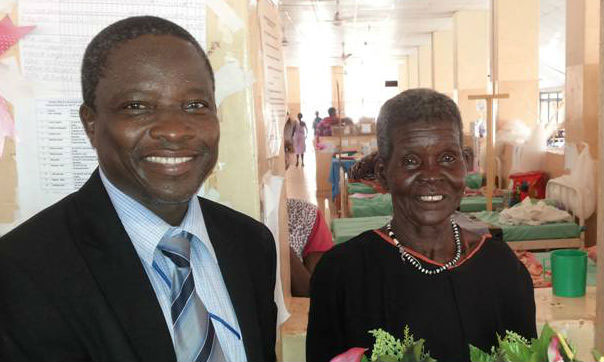 Wau, South Sudan – It seemed like the cards were stacked against Regina Awol Deng. She was forced to leave school when she was 7 years old, and to marry when she was just a teenager. She found herself pregnant at 17. And when she developed life-threatening complications, she was far from the nearest hospital with no emergency transport.

“I was in pain for two days. On the first day there was lots of movement, but on the second day I noticed I could not feel the baby moving inside of me,” she said.

When she finally found a ride to the nearest hospital, it was too late. “When I arrived, they told me my baby was dead,” she said.

Her own life was in danger, as well. Her body was swollen, and she soon fell unconscious. The doctors performed a Caesarean section to save her, but when she woke up, she knew that something was wrong.

Regina Awol Deng, 18, experienced an obstructed labour, a stillbirth and an obstetric fistula. After treatment, she says she wants to return to school. Photo: UNFPA South Sudan/Jaime Jacques

“I couldn’t control myself when I had to urinate,” she said. “When they removed the catheter, I felt urine coming out.”

The prolonged, obstructed labour had left her with an obstetric fistula – a hole in the vagina. This condition can leave women leaking urine or faeces, or both, and typically results in social isolation, depression and deepening poverty.

“Whenever I drink something, I feel pain, and I never know when the urine will come,” Ms. Deng, now 18, told UNFPA.

In July, a group of international surgeons came to Wau for a month-long programme to bring relief to women like Ms. Deng. Part of the Campaign to End Fistula, the programme was run by the Government of South Sudan with support from UNFPA.

The campaign reached out to women over the radio and through UNFPA-supported clinics and midwives. Many women travelled great distances to reach treatment, some of them leaving their villages for the first time.

At the hospital, fistula survivors shared their experiences: All had faced stigma, isolation and depression.

"Wherever I sit, there is a smell all around me, and nobody wants to be around me,” said Hellena Lou Machar, 30, who had been living with fistula since her first pregnancy nine years ago. “My husband doesn’t like it. The smell is embarrassing and I have no control over it.”

When she learned about the programme, she was determined to take part. “I heard that they were fixing people with this problem, and I had to find my way here,” Ms. Machar said.

She and Ms. Deng were among 71 women and girls to receive reparative surgery. The eldest, Akon Kang Ngang, 76, had been living with fistula for nearly 60 years.

South Sudan has one of the world’s highest maternal mortality rates, and approximately 60,000 women and girls are thought to suffer from fistula. The country’s poor health infrastructure means many women lack access to emergency obstetric care. Child marriage and adolescent pregnancy are other factors.

“The problem here is that forced marriages result in early pregnancies,” said Dr. Said Ahmed, the chief surgeon of the campaign. Girls who are pregnant before their bodies are ready are much more likely to experience fistula."

But the measures required to prevent fistula are well known. Ending the practice of child marriage is critical, both to prevent fistula and to protect girls’ overall well-being. Access to emergency obstetric care – particularly timely access to facilities and health staff able to perform a Caesarean section – must be improved. And family planning programmes must also play a role, as these empower women to space births, helping to improve maternal health.

Yet family planning is not widely accepted in South Sudan . Many people believe women should have large families to replace the population lost during the country’s recent war.

Health workers in Wau provided family planning counselling to the fistula survivors who had come for treatment, encouraging them to make their own informed choices about future pregnancies. When women feared they would encounter resistance at home, staff offered to reach out on their behalf.

Ms. Deng knew family planning would help her pursue her goals. “I want to go back to school,” she said. “I want to wait two or three years before I get pregnant.”

At her request, health workers counselled her husband on family planning, as well.

The people in the hospital called my husband to talk to him about birth control, and he has agreed to let me use it.”