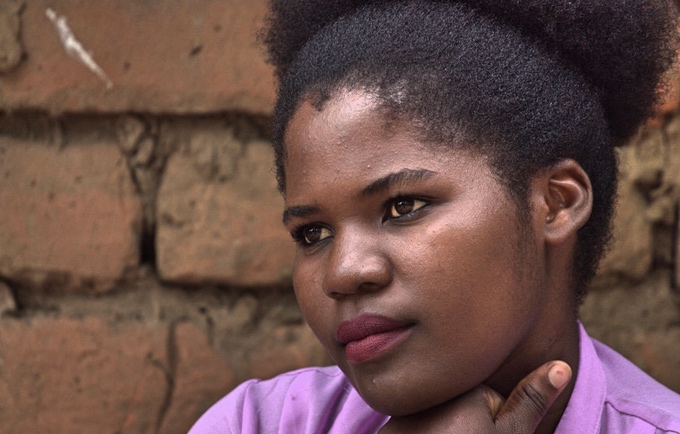 LILONGWE, Malawi – Monica Kaleso loved to go to school. She studied hard and never missed class. Her dream of becoming a medical doctor was on course until 2013, when, at the age of 17, she began a relationship with a man from the same village of Kadammanja.

Later that year, Ms. Kaleso discovered she was pregnant. Her world crumbled.

Her boyfriend refused to take any responsibility. Ms. Kaleso was devastated. She eventually dropped out of school.

After going into labour, Ms. Kawelo struggled to find reliable transportation for the bumpy journey to the hospital. When she finally did arrive, she was unable to get immediate treatment. The hospital was small and the staff busy.

"The baby was very big and I was so young," she recalled, explaining that she experienced a prolonged, obstructed labour.

Yet she spent three days at the hospital before receiving help.

Tragically, the baby did not survive childbirth. And that was just the beginning of Ms. Kaleso’s problems.

The morning after returning home from the hospital, she woke up and noticed her bedding was wet with urine.

Ms. Kaleso had developed an obstetric fistula, an injury caused by childbirth complications. Fistula causes incontinence and can also lead to infections, chronic pain and other problems.

‘I was too young to live this life’

"I thought it was normal, but this occurred for almost a year,” she told UNFPA.

Like many fistula survivors, Ms. Kaleso suffered stigma and isolation. Her friends turned away when she approached them.

Her hopes of going back to school after delivery faded.

“I did not even know if this condition could be treated or not,” she recalled. “I was too young to live this kind of life.”

But one day, as Ms. Kaleso's father harvested his tobacco crop, he heard on the radio that fistula treatment was available at the Bwaile Centre in Lilongwe.

Many of these repairs have taken place through a partnership with the Bwaile Centre, which has a specialist surgeon and programme that helps survivors reintegrate into the community after treatment.

Ultimately, UNFPA and Malawi aim to transition from fistula repair to prevention. The condition is easily prevented through access to emergency obstetric care – usually in the form of a Caesarean section. In fact, fistula is so preventable that it has been essentially eliminated in industrialized countries.

Ms. Kawelo is now an ambassador for the Bwaile Centre. She helps seeks out other fistula survivors and helps them access treatment.

She has also been able to return to school. Her new dream is to finish her degree in education and teach mathematics.

“I consider myself very lucky," she said. "Some women have lived with this condition for more than 40 years, and others even 50 years or more.”

“One pregnancy can have life-threatening consequences, such as HIV and other sexually transmitted diseases, birth injuries including fistula, more children, and they are at risk of dropping out of school, and thus perpetuating the cycle of poverty,” Ms. Hong said. “It is encouraging to see that Monica is back in school and pursuing her dreams”.